Here are examples of videos and multimedia projects I have created over the years.

This video is the intro of a multimedia project that I performed in coffee shops and book stores. This video was shot in Ocean Beach on mini-DV, then I wrote a song that would underscore the scene on ukulele, guitar, and djembe.

Sunset Cliffs Notes Part 3: When the Night Feels My Song

This video is one of the transitional elements in a multimedia project that I performed in coffee shops and book stores. This video was shot at Sunset Cliffs and around Ocean Beach on mini-DV, I would play the song with a click track while the video played on a monitor or projection screen.

This video is the end of a multimedia project that I performed in coffee shops and book stores. This video was shot at Sunset Cliffs in Ocean Beach on mini-DV, then ukulele, vocals, and sound effects were overdubbed in the studio.

Written by: The Who

This video is part of a multimedia project that I performed in coffee shops and book stores. This video was recorded using the time-lapse feature. The original image is from a 1920s piece of ukulele sheet music. The image wasn’t quite perfect, the woman had her back turned and you couldn’t see the ukulele in her hand. This video shows the photoshop process used to make the image ready for permanent application, and then the tattoo process.

This song was written for a play called Red Herring, I wrote the melody and played the ukulele and harmonica. On stage, the song was played through a radio, but I decided to turn it into a vintage looking TV commercial.

Reefer Madness is a 1936 propaganda film created to show young people the dangers of smoking the “devil’s lettuce.” This version was colorized by a company called Legend Films and I captured the analog audio, performed some restoration and clean up, and re-designed the sound in 5.1.

Val Vigoda is a founding member of the band Groovelilly and has composed many hit musicals in addition to writing songs songs for Disney and other companies. Val recently struck out on her own performing her songs with the aide of Ableton Live looping and production software. Just Getting Good is a live performance we filmed with an audience, we also recorded multi-track audio and mixed it all down in the studio. 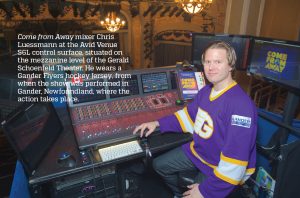